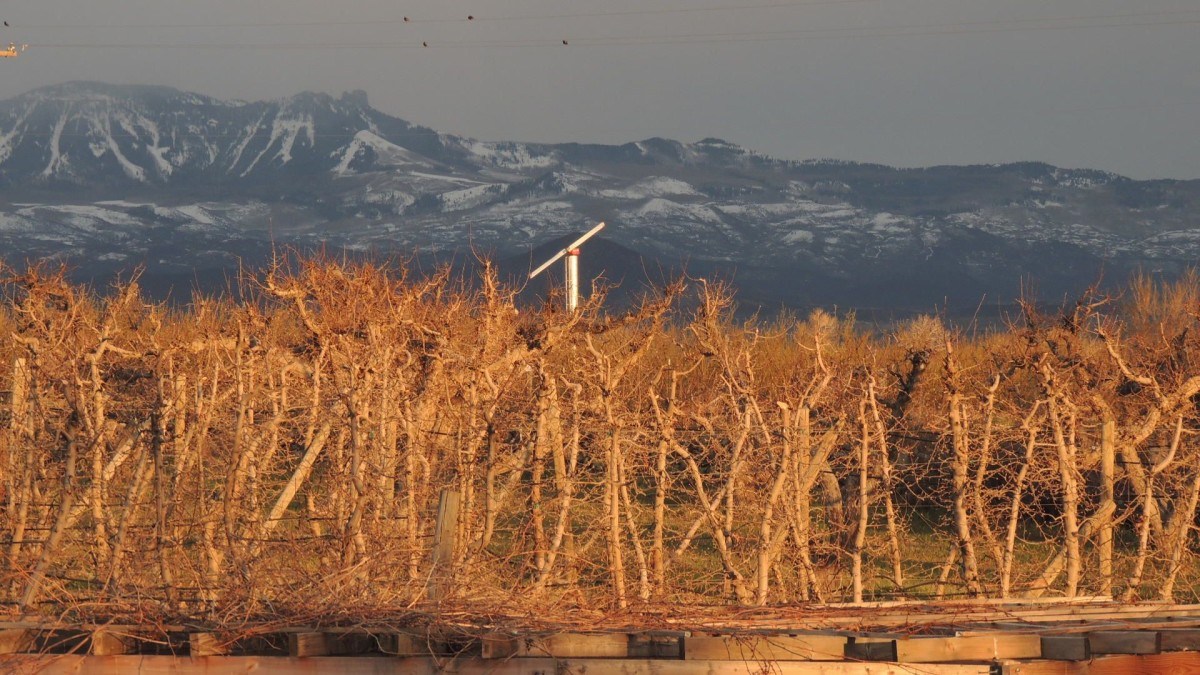 It is the start of the spring whether season – the time of year where for two months we wonder whether we will make it through spring frosts with a good crop or whether we will have to tighten our belts and make it through a frost year, the time of year where the fate of the fruit year is in Mother Natures climatic hands. And this year the whether season has started very early. Instead of two months of wondering about the weather, we will have nearly three. We normally don’t worry about cold and frosts until the end of March. But this years warm January and February temperatures have advanced the trees. The flower buds have started to swell well before we would normally think of them getting excited about spring.

After all the weeks of abnormally warm temperatures, ten days ago the forecast was for one night of below normal temperatures. Those tender buds were swelling and used to the tropics and suddenly a forecast of 9 degrees for the night was going to drop artic cold on them.

Frost years will happen and have happened and we have survived them more than once. But it is hard to walk out the door every day for a summer and fall and look at beautiful trees devoid of fruit. It is hard to irrigate and control pests and grow cover crops when you know that every dollar spent is a dollar that won’t be made back that year. Yet if you don’t do those things, then the next year’s crop won’t be good either. Trees are perennials and how we treat them this year affects next years crop and even the next several years’ crops. If we were to ignore the basic needs of our trees for a year, it would take years for them to recover.   That means that even in the no fruit frost years, we take the same care of the trees as we would in a good year – pruning, irrigating, keeping insects and diseases in control, mowing cover crops, and fertilizing.

Before that predicted cold night last week all the growers were looking at each other and asking how much cold can the fruit buds handle?  We ran temperature and hardiness models, we had charts from past freeze chamber research tests, and we had experience, but this early in the year all those things have wide error ranges. The recent warm temperatures tend to make the buds more sensitive, but their early stage of development (just barely swelling) means they can be pretty tough. Even with years and years of experience and research charts to back us up, the answer was that no one really knew what temperatures might cause harm. And not knowing and guessing makes for lots of gray hair and time thinking about all the what ifs.

To help answer some of the questions, one of my friends and the owner of a business who sells us supplies went and cut peach branches from the higher and lower elevation farms. He wrote a check to the local research center to have them test those buds in a freeze chamber and see at what temperatures they showed injury. He did this just so all of us could have actual, not speculative, information. We could use those numbers to decide if we would need to run our wind machines for the first time of the season. We expected to have the results the afternoon before the forecasted freeze.

We prepared our wind machines hoping that we would not yet need them so early in the season. And all the growers waited for the actual data to come in to decide at what temperature to set our alarms. The early afternoon turned to mid-afternoon and still no word on the data. Then it came out that the testing could not be completed until the next morning. The data would be no help for the coming night. So, only after the fact would we know what the critical temperatures were for the buds – we would be able to look back and say, we should have rather than looking forward and saying we need to.

With no hard data available, guesswork had to be turned into a decision. I looked at all the models, factored in my experience, and then threw in a healthy dose of why would I take a chance. It would be terrible to look back and say I wish I had done something. Then I threw in a little gamblers attitude and came up with a temperature at which we would start our machines.

We did run our wind machines that night – we set our alarms for 15 degrees which we hit to at 3:30 a.m. We weren’t the only ones running our machines that night. Several of our neighbors joined us in the late night/early morning frost fight. Why take a chance…

And when the data came in from the actual freeze chamber tests the next morning, it turned out the buds were tougher than we had guessed. We probably didn’t need to turn our machines on until 11 or 12 degrees – temperatures we didn’t hit until right at dawn.

But the whether we will have a crop season has started and it will continue until the end of May. I won’t travel far from the farm for the rest of the frost season, because you just never know when the forecast will be right and when it will be wrong. We can’t beat Mother Nature, but we will do all we can to mitigate the upcoming cold nights. We are keeping our fingers crossed that Mother Nature will treat us well. We hope that all that finger crossing will lead to delight in branches laden with fruits and the joy of bringing boxes and boxes of fruit to the markets this fall.